A little Madness in the Spring

A little Madness in the Spring

The Dickinsons take a fun family outing to an asylum. Henry helps the soldiers with a uniform inspection.[1]

The Dickinson family takes a tour of a women’s mental asylum, where each member of the family gets a taste of what they desire. For Edward it’s a place to stamp his name on; his idea of legacy is tied into institutions. His wife, however, just wants to escape from the world and likes the idea of spending a few weeks in a place where you can do nothing but relax; even if it means pretending to be crazy to get in .

Lavinia, still reeling over Henry Shipley and Joseph Lyman’s deaths during the ongoing war, finds solace in another woman grieving over the latter. Shocked to discover they both mourn the same lover, she takes pleasure learning that Lyman only really had eyes for her; that is, until she remembers that he is dead.

Emily, who’s at most danger of being committed, finds a group who has been casted aside by society, rebels of conformity like her. Abby Wood and others have been locked in a dungeon, and she bravely leads them to their escape, unaware that at that very moment the head doctor is negotiating her own stay in the facility.

On the frontlines, Henry is finding it increasingly difficult to motivate the black squadron. He believes Higginson’s promise that a successful uniform inspection could lead to their being armed, but the others have seen this trick done before. To inspire them, he brings out his sewing kit, and talks of his life. Henry has been writing letters to Betty that he refuses to send. “Maybe it’s better they forget me,” he says, “as odds are they’ll never see me again.” But little does he know the harm he’s causing back in Amherst.

Nevertheless, Henry advocates for making the small changes they can, rather than feel useless in the face of things they have no sway in. “The world tore my family apart,” he tells them, “and sadly my sewing skills can’t mend a broken community or a broken heart. But what I can fix is a uniform”.

Back in Amherst, Edward refuses to sacrifice his daughter for his reputation but does not care for the others suffering in the asylum. Likewise, Henry’s uniform inspection does little to change the situation of the squadron. Despite an advancing army, Higginson waffles, in a true white liberal manner, on the issue of arming them. Both attempts at group liberation are blocked by the white men in charge, but it’s significant that Henry sees the pain of the black soldiers and vows to step up the fight, whereas Emily doesn’t even look behind, not thinking even of her friend. For Emily, the fight is one she can slip in and out of like a nightgown. For Henry, this is his duty and his life.

Meanwhile, Sue proposes that Austin take an active part in raising their child, but their plan is potentially undercut when Austin receives the draft notice. 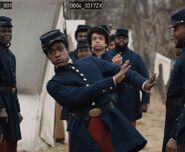 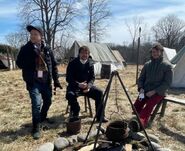