In 19th century Amherst, Massachusetts, a young Emily Dickinson is tired of her family's attempts to find her a suitor. The latest is a friend of hers, George, who agrees to publish one of Emily's poems. Emily then finds out that her brother Austin proposed to her best friend, Sue.

Austin tells his parents his plans to move himself and Sue to Detroit, however his dad wants him to remain in Amherst. Afterwards, Emily and Sue meet and Emily asks Sue to always love her more than Austin and they kiss. George then tells Emily that her poem will be published in the next edition of the magazine, but Emily is afraid of her father's reaction.

At dinner, Emily's father announces he plans to run for Congress, Austin announces he and Sue will remain in Amherst, and Emily tells her family about her poem being published. At the latter, Emily's father yells at her about ruining the family name. In her mind, Emily meets with Death and discusses her poems. That night, Emily's father talks about how he doesn't want to lose her and asks her not to marry and move away.

I have one purpose on this earth and that is to become a great writer. 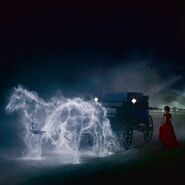