Em (by Austin and Lavinia)
Evelina (by Mr Conkey)

30 episodes
Emily Dickinson is the main characters in Dickinson. Emily is an aspiring poet who is in love with her best friend, and her brother's wife, Sue Gilbert. She is often portrayed as the ‘weird one’ in the Dickinson household, having hallucinations and wanting to write poetry, despite being a woman. She continuously stands up against societal norms and throughout the series goes through struggles with fame, being a woman in the 1800’s, and trying to solve her families issues.

She is portrayed by Hailee Steinfeld.

Emily grew up in the 19th century in Amherst, Massachusetts. She wrote poems in her free time and spent time with her friends, namely Sue, and her family.

At the beginning of Season 1, Emily's family’s main wish for her is to find a proper name suitor, but she isn’t interested. She’s interested in her best friend Sue, who was recently engaged to Emily’s own brother. In season one, she is portrayed in a white dress throughout the first episode which is historically correct given that in Amherst she was known as the “woman in white”.

Early on, Emily writes poems and even gets published, with the help of one suitor, George Gould, who also asks her to marry him (to which she rejects). Her family is disappointed in her writing, declaring that her poems will ruin the family name.

Emily and Sue fantasise about running away together, before they both go out and spend the day cross-dressing in men’s clothes in order to go to a lecture and the local college about volcanoes.

One night, Emily’s brother announces his engagement to Sue, but quickly Sue runs off as earlier Emily had run upstairs due to period cramps. Sue finds her in Lavinia’s room, and Austin Dickinson walks in on them kissing. Sue declares that she feels suffocated and runs off, to their dismay.

Emily feigns sickness, leading her parents to give confessions and for Sue to return upon the news, and Emily convinces Sue that her best option is to marry Austin, rather than being with Emily.

Emily later asks Austin to submit one of her poems in a local competition, afraid to do it herself because she knows she’d disappoint her father. She wins the competition, yet once her father, Edward Dickinsonrealises, he hits her and sends her into a hallucination where she is the main act at the circus.

Emily’s good friend and spiritual husband, Ben Newton dies, which devastates her. The only thing that truly continues to make her happy after his death is writing, and Sue. After Emily writes a poem for Sue on her wedding day, Austin bans her from the wedding due to the fact she made Sue cry as well as sent her flowers. which

In the second season, Emily has written hundreds of more poems. One night, despite having not seen Sue for a while, she goes next door to where Sue now lives with Austin. Her and Sue share an almost kiss, before going back to the party in the parlour, where Emily is introduced to the editor of the Springfield Republican, Sam Bowles.

Emily throughout the season, struggles with her perception of fame as well as deciding whether or not she wishes to be published by Sam, while at the same time she begins to fall for him, even once having a sex dream about him.

When Emily visits the opera with her family, she is able to sneak backstage and finds the lead actress of said opera, who tells her about what fame is really like and what performing is like. Emily then begins hallucinate Sue, and the two share a passionate kiss, before ‘Sue’ walks away, leaving Emily on stage.

Finally, Emily decides to publish her poems, giving one of them to Sam to publish. Once it appears in the newspaper however, Emily becomes invisible and only Austin is able to see her, as well as Sue who later tells her that she was able to sense the Dickinson’s presence. This occurs when Emily goes to find Sue, but instead finds her and Sam sleeping together in the library of the Evergreens.

Throughout the season, Emily also communicates with Nobody, a hallucination she continuously imagines. She later finds out that nobody is actually a projection of her brother’s friend, Frazer Sterns, who due to Nobody, she realises will later die in battle during the American Civil War.

In the season finale, Sue finds Emily in her bedroom, writing and she walks in, wanting to talk to her. Emily quickly rejects the conversation, angry because Sue pushed Emily towards Sam and caused her to fall in love with him, even though she believes Sue loves him, which she quickly denies. After a heated argument, Sue confesses her feelings to Emily, and the two share a kiss which leads into a passionate day around the house, eating huge plates of food, sharing a bath, and ending up in the greenhouse, with Emily saying she writes for Sue alone, and Sue promising to never let go of Emily again.

Season 3 begins with Emily and her family at her Aunt Lavinia’s funeral, where she sees a bird and begins to believe that her aunt was communicating with her. Once home, it’s demonstrated how Emily is struggling with keeping her family in order, with her brother and Sue expecting a child, her mother in mourning, and her father having a heart attack.

Sue and Emily are in a happy place at the beginning of the season, Sue continuously telling Emily how much she loves her, though Emily doesn’t reply until after she sends a letter to Thomas Wentworth Higginson and imagines herself at a gay bar with him, expressing her love for Sue to everyone there. Sue expresses how she wants to run away with Emily, and raise her and Austin’s baby together, without him or the rest of Emily’s family getting in the way of their relationship, but Emily feels the need to defend her family and help heal all of their woes.

Not only does Emily long to fix the civil war occurring in the Dickinson house, between Sue and Mrs. Dickinson as well as Austin and Edward Dickinson, she also wishes to help get to the end of the Civil war with her words, though many express their disapproval and how they believe that won’t help anybody.

The rest of the family feel that Austin is unfit to look after himself, never mind a baby, as he drinks until he’s drunk and then yells at his father, leading to Emily having to choose between the two men. After Austin declares he wants to divorce Sue, Emily chooses her father.

After sending the letter to Higginson, Emily gets a response, but doesn’t tell Sue in order to make sure she doesn’t get upset. However, Sue does find out and a heated argument occurs between the two, ending with Sue storming out of Emily’s room.

After visiting an insane asylum with her family, Emily arrives back home and finds Sue is still angry at her. Sue asks Emily to kiss her and Emily responds with: "I cant". After this encounter, she finds Vinnie crying. Before they know it, the two are time travelling to the future, (later turning out to be another of Emily's hallucinations). They encounter Sylvia Plath at the Dickinson house, who shows them Emily's room, and Emily realises that her poems will later be published. She then is told by Plath that people believe she died of unrequited love from a man, so she exclaims that she has "never in [her] life been in love with a man". Sylvia says that maybe she's right, as there's been a rumour about Emily being a lesbian. Emily immediately changes the subject until Lavinia confronts her, and she admits to loving Sue.

After her father asks her to write his will, Emily runs away, upset upon realising he is giving everything to Austin. She encounters Nobody and he takes her to Dante's grave, and she goes into the inferno. She finds her family in her worst nightmare, her father is dead, her sister is alone and unwed and blaming Emily, Austin is calling her insane, and Sue's appearance is similar to a man's. Soon she goes and sees Henry, fighting against the south and winning. And she feels hopeful once more.

Emily heals her relationship with Austin along with Vinnie, before making her mother feel better and visiting Sue. At Sue's house, the gang are celebrating/saying goodbye to George, who is off to war. After the party, the group ask Emily to read a poem that Sue had published anonymously for her in the paper, and although she never does, she does this once "mostly for sue". Later that night, her and Sue sleep together.

In the final episode, Emily asks Betty to help her design a dress which she wishes to make herself. It's white, has pockets, not fitting, and comfortable. She calls it her 'uniform'. She decides to spend the rest of her time writing, up until her death, locked in her room. We see her on a beach with her dog, getting called into the ocean by Sirens. She gets in a boat and swims out to them, and that is the last we see of Emily Dickinson in 'Dickinson'.

Emily has long, wavy dark brown hair and pale skin. She is of medium stature and often wears long, flowing dresses. She’s typically seen with her hair up, but occasionally has it down, most commonly when she visits Death in his carriage and wears a big red dress with bright red lipstick.

"Because I could not stop for death, he kindly stopped for me; the carriage held but just ourselves and immortality."

”Tragically, I am a woman”

” She dealt her pretty words like blades. How glittering they shone.”

”I had an empire! It was right up here, and then you stole it from me. You and Sue.”

”I love when people quote me”

“I am a poet. And there is nothing you can do, to stop me”

”don’t worry everyone, Emily Dickinson is here to help” 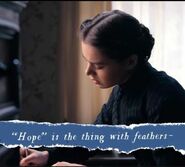 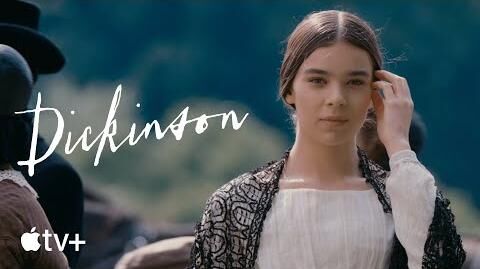