Ebert was born and raised in Colorado.[1] He attended high school at the Denver School of the Arts and graduated from Juilliard.[2] Ebert made his Broadway debut as the understudy for the role of Ken in John Logan's play Red in 2010, followed by the Broadway production of Kneehigh Theatre's Brief Encounter in 2010 as Stanley. Ebert is known for originating the role of Mr. Wormwood in the Broadway 2013 production of Matilda the Musical, for which he won the 2013 Tony Award for Best Featured Actor in a Musical. Ebert's performance in Amy Herzog's 4000 Miles at Lincoln Center Theater as the character "Leo", the grandson of Mary Louise Wilson's Vera, won him an Obie Award in 2012. He starred as Robin Hood in The Heart of Robin Hood by David Farr in Winnipeg and Toronto from October 2014 to March 2015.[3] 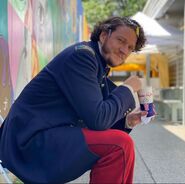 Gabriel on set of S3