Grief is a Mouse

Grief is a Mouse

Emily takes steps to ensure that her family won’t repeat their past mistakes. The Amherst gang gathers for a fond farewell.[1]

Emily continues to remain firm in her decision to make things right going forward. She wastes no time in gathering her siblings, where she tells them of her father’s will. She then makes Austin agree to give her and Lavinia freedom as they will not be another item of property. He agrees on the condition that Vinny gets rid of her cats.

With that done, Emily then turns to her mother, still in grief over Aunt Lavinia’s death. Trying to up her spirits, Emily mentions seeing a bird at the funeral, which she thinks could have been Lavinia’s spirit. But Emily’s aunt hated birds. Yet, she did like mice, and as a mouse scurries across the floor, Emily and her mother see a way of moving on with their lives.

Edward rejects a possible run for office, deciding his family needs him more. When George comes to Sue and Austin’s before he heads to war, Austin reveals how he traded his draft card in favor of looking after his son. “How will I make sure the future of the Dickinsons is different from the past,” he says, and the others affirm his decision. There’s work he can do off the battlefields.

Higginson learns this too. Seeing Henry’s regiment has seized victory without his help, he announces his intention to visit a certain young Amherst-based poet. Henry mentions his acquaintance with Emily. Higginson is shocked and recites one of her poems, and Henry walks off with him, presumably sending a message to go to Betty.

In the end, the youth of Amherst unite to make what could be George’s final night in Amherst a memorable one. After the oddity of Lavinia’s telling of her new performance art (“Sheep No More,” where she stares at a sheep and thinks of death), they close out the night with a rare public recitation from Emily. Everyone sits in stunned silence, her craft having a profound impact on those around her.

Soon enough, she’s in bed with Sue. “This is better than any poem,” Emily says, as Sue goes down her body. 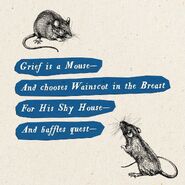 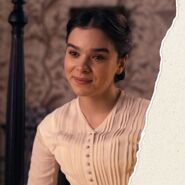 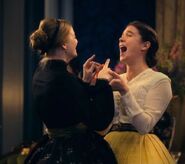 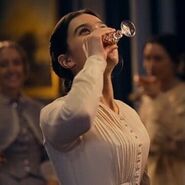 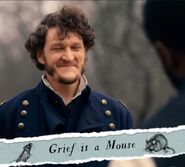 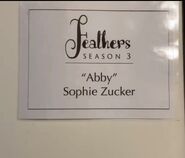