My life had stood - a loaded gun -

My life had stood - a loaded gun -

On the day of a soldier's memorial, Emily's efforts to keep her family's hope alive reach a breaking point and she descends into a personal inferno.[1]

At Frazar Stearns' funeral, the whole town shows up, except for the Dickinson clan. Eventually, Emily shows up, supporting her father, who delivers a speech so moving that even the Edward Dickinson naysayers fully have his back now. Even Fraser’s ghost whom Emily first saw as Nobody shows up to deliver some pointed commentary for the poet, and looks right through Emily’s declarations of “hope”.

Emily realizes that she did try to reunite her family, but Austin wants no peace. He accuses Emily of being “daddy’s girl,” and for a moment he’s proved right. After the service, the two bond, and Edward surprises his daughter by announcing his intention to name her executor of his will. She’s delighted that he believes her to be of “sound heart” and capability, and he takes some of her ideas (such as endowing a scholarship) into consideration. “You’ve always been loyal to me, even if I’ve not always deserved it,” he says. “All I’ve ever wanted is to make you happy.” And for a moment the two pillars of their Dickinson family are at peace.

Down south, Higginson writes his own will. He exits his tent in shock, finding it completely empty.

Similarly, Emily is shocked when her father, despite whatever goodwill they have between father and daughter, nevertheless decides to leave the majority of his belongings to his only son. Even though the two are at a seemingly untraversable impasse. He would rather stick to the status quo of the time than commit to anything radical.

Emily is disappointed in the man that moments ago she felt a real connection to, calling him a “scared sheep”. “You have no power to change anything… and for that reason, nobody will ever care who you are”. But is through her heartbreak, that she realizes that Austin was right. Despite his loyalty, her father is as shortsighted as the times they live in.

Distraught, Emily runs into Betty, who is too busy dealing with her own problems. She’s learned of Henry’s regiment, distraught by his lack of contact. She puts Emily’s problems into perspective and dismisses her feeble words. “All hope ever did was make me cry.”

Next, Emily runs into Fraser, who leads her into a deep grave leading to a haunted house of all Emily fears. A double-tracked Lavinia blames Emily for her spinsterdom, Austin blames her for his failed marriage, and so on. A masculine-dressed Sue (contrasting Emily in a white dress) proclaims that Edward’s death means the two can be together, but this is not how Emily wanted things to go. She refuses to kiss Sue, and the latter leaves, decrying that there was “never any hope for us.”

Emily tries to follow her but finds herself on a battlefield, with Death’s carriage running through. She watches at Henry’s regiment fights the confederates. The battle itself reeks of budget constraints; when Henry overpowers a soldier, his regiment sees victory is at hand.

Suddenly Emily is back in Amherst and having lived through darkest night, seen victory against the odds, a bird chirps overhead. 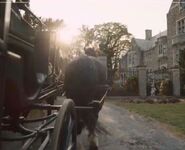