Sang from the Heart, Sire

Sang from the Heart, Sire

Emily tries to celebrate her father’s birthday with an old-fashioned family singalong, but it devolves into another battle in the Dickinsons’ own civil war.[1]

At a quilt auction where Emily Norcross feels so terrible about selling the one remaining possession of her sister that she had, she asks Edward to buy it back. Emily is surprised by the Higginsons’ feedback because he asks her for more poems, and Lavinia has chosen a vow of silence as this week’s act of self-serving activism.

Things start to simmer when Edward is called out for his recent letter in the newspaper. Unfortunately, he’s shown more and more sympathy to the confederates (in an effort to stay neutral), but his public expression is too far. What he believes to be a defense of his brother is taken as praising the enemy, and the people of Amherst are unhappy, threatening to remove him from his treasurership. He’s unsettled, but he still has his family, and that’s what counts. His daughters rush to him, less in defense but in consolation, to make sure he is ok. Despite their political differences, he is still loved.

Especially since it is his birthday, and Emily is planning a surprise party. She invites a tired Sue, who, inspired by her encounter with Walt Whitman, she expresses her love to. Sue agrees and invites Austin, who reiterates his refusal to talk to his father, and says he will spend the evening with their child. But Sue does not see this happening and she trots out some generalized gender roles. Her distaste for her husband’s actions becomes more evident when, spoken of in generalized terms she tells him to “put a uniform on”.

The party itself is a delight, with the family singing along (or mouthing, in Lavinia’s case), and the Dickinson parents recounting the story of how they met. In recounting their story, Emily Norcross, unearths some buried emotion in her, when she realizes that she never saw her mother again after her wedding, and feels especially sensitive with her sister so freshly in the ground.

Eventually, Emily begins playing “Hard Times Come Again No More,” and her singing seemingly strikes a chord with everyone around her. Even Austin, who surprises everyone with his appearance, wishes his father a happy birthday.

But the peace doesn’t last long. Soon everyone is harping on his drinking, and Austin makes an announcement. He will be starting his own law firm which will specialize in divorce. Starting of course with his own. Worst of all, he wants full custody of the child.

When he announces his divorce Emily Norcross decides to come in with her wedding dress, at the worst possible moment. The family is outraged, but it’s Sue’s dismissal when she says that “[y]ou won’t even remember this in the morning” that cuts deepest. Emily recalls their arlier conversation where Austin asked her to pick a side and confirms that she has chosen. In the end her sister has seemingly chosen her father over her brother.

Emily Norcross, who has somehow made it up the stairs in her dress but wants to come down trips and falls down the stairs in the process.

With Austin out, the Dickinson girls and Edward seem finally at peace. Sue gets one final dagger through the heart.

Upstairs she finds the letter from Higginson — the poem she thought was just for her was shared.

Hurt, she compares Emily to Austin when she says to hersekf that,“You think you’re fighting for something. You’re just running away” in reference to Emily. 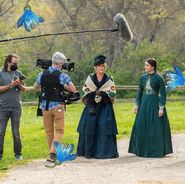